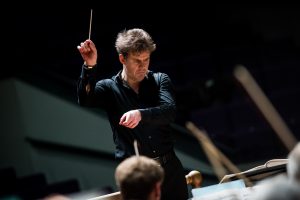 Robin Browning is an established conductor, performer and music-educator. Praised as an “expert musician & conductor” by Sir Charles Mackerras, he is a passionate advocate for music and for the arts in general. Since making his debut with the Royal Philharmonic Orchestra at London’s Barbican, Robin has conducted the Hallé, English Northern Philharmonia, Northern Sinfonia, Danish Radio Symphony Orchestra, Ensemble Intercontemporain, St Petersburg Festival Orchestra, and Estonian National Youth Orchestra. He made his US debut in 2011 with the Boise Philharmonic, and recently assisted Sakari Oramo for the UK Premiere of Esa-Pekka Salonen’s Violin Concerto with the BBC Symphony Orchestra.

Robin has performed in some of the world’s most famous concert halls, including Snape Maltings, London’s Cadogan Hall, the Rudolfinum in Prague, and the Banff Centre in Canada. In 2008, Robin gave a concert at the Olympic Stadium, Nanjing, conducting live on Chinese television before an audience of 70 million. He has worked with a wide array of soloists, including Guy Johnston, Aled Jones, Jack Liebeck, John Lill, Craig Ogden and Raphael Wallfisch.

Robin studied at the Accademia Chigiana, Siena, with Myung-Whun Chung and the legendary Ilya Musin. He furthered his training in the USA with Joseph Gifford, and was invited to Estonia for masterclasses with Neeme and Paavo Järvi at the Oistrakh Festival. Robin also studied with Sir Charles Mackerras, Sian Edwards and Benjamin Zander, and participated in the first ever Conductor Development Programme with Milton Keynes City Orchestra in 2012.

Passionately committed to the training of younger musicians, Robin has guest-conducted orchestras at both Trinity Laban Conservatoire and Guildhall School of Music, and works regularly with young conductors at the University of Southampton. In 2008 he was involved in the Barbican Young Orchestra project, preparing the inaugural orchestra for Sir Colin Davis. Robin is also dedicated to contemporary music, having released four professional studio recordings in the last 10 years. 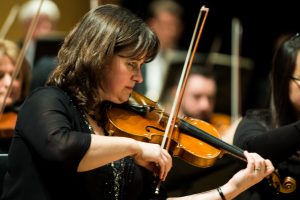 Helen started the violin aged 8 and gained her ARCM Performer’s Diploma with honours aged 16. She went on to study at the Royal College of Music before being awarded a scholarship by the Countess of Munster Musical Trust to study on the chamber music course at the United States International University in California, USA. Helen then spent many years working as a professional musician playing principal violin with a wide range of orchestras, from symphony orchestras such as the Philharmonia, BBC Symphony Orchestra and Halle, chamber orchestras such as the London Mozart Players, English Chamber Orchestra and the City of London Sinfonia, to playing Principal 2nd Violin in the BBC Concert Orchestra for 6 years. In addition to this she has worked as a session musician recording for films and jingles, and in West End shows such as Phantom of the Opera and Les Miserables. Throughout this time, she enjoyed playing chamber music up and down the country with the Amabile Ensemble, The Concert Players and fourte.

Since 2004, Helen has combined a job in IT working for banks in the City of London with being leader of the de Havilland Philharmonic and attempting to learn the French horn!